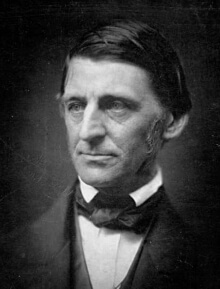 Water’s concentric circles are ‘the highest emblem’ in the world’s ‘cipher’ since all life is, read rightly, cyclical. An affirmative essay, it contains one huge doubt: that such philosophy implies ‘indifferency of all actions’.

Emerson moralises mellifluously on eternity’s chastening perspective, and worries over his chosen path, critics, friendships and ruthless ambitions (‘Every personal consideration that we allow costs us heavenly state’). The essay circles back to propound a law of ‘eternal procession’, but is most engaging on concrete questions like the American commercial mindset. It ends with several optimistic aphorisms, some truisms, about worldly pleasures as surrogates for spiritual conquest.