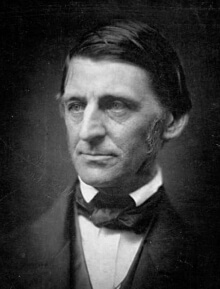 Emerson finds himself standing halfway up some stairs; an image of personal disorientation in middle age and an allegory for Life. He writes with wit and candour about procrastination, envy and self-doubt.

Apparently rambling, the essay’s underlying structure is laid out like stepping stones towards the end: ‘illusion’, ‘temperament’, ‘succession’, ‘surface’, ‘surprise’, ‘reality’ and ‘subjectiveness’.  The essayist’s disillusionment seeks consolation in collective effort and practical labour, yet Emerson knows he is a thinker, chasing his own tail, not a doer. He describes life as a series of surprises, stylistically mirrored by his inventive vocabulary and imagery at every turn.

Themes: Independent Thinking, How to Age and/or Die