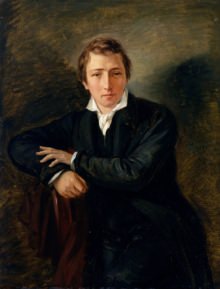 Concerning the History of Religion and Philosophy in Germany (Zur Geschichte der Religion und Philosophie in Deutschland, first published in French in 1834 and then in censored German the following year. Recent English edition published by CUP, ed. Terry Pinkard, 2007)

An exiled poet who knew the leading thinkers of his generation discusses the subject as labeled on the tin, though with more idiosyncrasy and a great deal more irony than that label suggests.

Intending to counter what he saw as de Staël’s Schlegelian misconception of German culture, he argues that German pantheistic philosophy is now triumphantly completing a revolution begun by the Protestant Reformation and replacing the old spiritualist religions. Though for the moment German culture is stuck at the bedside of a ‘dying God’, he warns the world to be on its guard when this philosophical revolution turns political.

Related recommendation: Nietzsche’s ‘On the Uses and Disadvantages of History for Life’ (1874)

Can also be found at: British Library shelfmark m07/32458