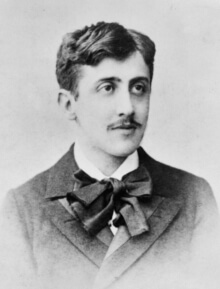 Note: Another Proust essay of the same title, designated ‘Days of Reading II’ by Penguin Classics, was published in Le Figaro in 1907; the latter mostly concerns the marvel of telephones.

This essay’s second part answers Ruskin, to whose book it was later prefaced, with Proust arguing that reading ‘should not play the preponderant role in life’ – it provides only spiritual ‘incitements’. The earlier, autobiographical section, about the pleasures of childhood reading, is cast as an exception.

There are witty asides – on frou-frou rooms that reflect one’s ‘non-self’, or on ‘cruel epilogues’ that abridge characters’ subsequent lives – but also serious ones on, for example, the Romantics alone knowing how to read classical literature, or mockery of a scholar’s search for truth being reduced to an arduous journey to visit obscure archives.

Themes: Books, Bookshelves and Reading, The Classics, The role of Art or Artists, Nature or Architecture/ Material Environment, Anti-Academia