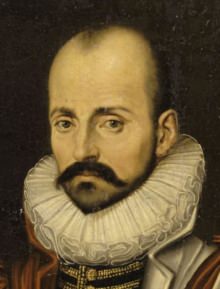 Montaigne’s relativism recognizes that ‘every man calls barbarous anything he is not accustomed to’; if the Tupinambá tribesmen of Brazil are ‘savages’, so are European torturers.

His fascination with the New World was fueled by one of his servants who had lived in the Brazilian colony, though this man’s account of Tupinambáethics and customs seems less reliable than Montaigne believes. One digression considers the true nature of victory and courage (in the mind, not body). Having interviewed three Tupinambá shipped back to Rouen, Montaigne reflects on their charming songs and their insights upon seeing French society through alien eyes.

Related recommendations: Diderot’s ‘Supplementary Observations on the Voyage of Bougainville’ (1772), Rousseau’s ‘Discourse on Inequality’ (1755), and Addison’s ‘Spectator No.50 [on the visit of the Iroquois]’ (April 1711)

Themes: Through Alien Eyes, How to Age and/or Die